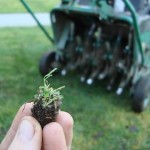 Aeration describes a range of mechanical operations used to improve the air content of the soil on bowling greens. Soil air content is reduced mostly by he perennial turf problems of Thatch and Soil Compaction.

Aeration can be sub-divided into surface and sub-surface aeration practices.

Surface aeration usually involves the removal of thatch, fibre and lateral grass growth and is usually carried out as scarification, verti-cutting or grooming. These are vital operations, helping to reduce the likelihood of disease outbreaks and generally smoothing the green and in many cases increasing green speed.

Sub Surface Aeration is mostly aimed at the relief of compaction in the soil, although hollow tining is also routinely used to facilitate soil exchange when this is required. The techniques in this classification include slit tining, solid tining, hollow tining, verti-draining and water injection.

Most techniques are aimed at fracturing hard pans and and creating air space within the soil. This generally improves drainage from the surface and allows for deeper root penetration.

An overlooked benefit of regular aeration is the increased efficiency of fertilisers, as they are released more readily to the plants by the increased populations of microbes present in well aerated soil.