Bowls green performance and organic matter are inextricably linked and today we will take our experiment to the next stage to show how organic matter management can influence green surface firmness.

What we’ve proved in our experimentation so far is something we, as greenkeepers know instinctively. Namely that wetter greens are slower, softer and generally less predictable in terms of surface smoothness and trueness, or put more directly; they just don’t play as well. The major leap forward here is that we can now prove this scientifically.

The problem we still have is that we are still dealing with symptoms at this stage. So what can we do to progress this argument to a stage where we can start dealing with the root causes of problematic, erratic and unpredictable bowls green performance?

We can continue to part three of the hypothesis and do some more experiments. Part three of our hypothesis argues that Organic Matter in the green is responsible for the excessive moisture that causes the green surface to be less firm than we would ideally have it.

Using samples from the same 3 greens as before, I set up an experiment with my Chinese students back in November 2015 to see if the moisture readings we were getting from the greens showed any correlation with the amount of organic matter in the green.

Now you will notice that I keep referring to the organic matter being in the green, rather than in the soil and that’s for a sound scientific reason. To understand that reason, we have to delve a bit deeper into what Organic Matter actually is.

A short time ago I published a reply I had sent to the owner of a website about golf where there was a good article dealing with the confusion in describing Organic Matter in greens. The fact is that Organic Matter exists in 3 main states in bowls greens and depending on which of the 3 we are talking about it will sometimes be referred to as Organic Matter and at other times Organic Material. So what are the 3 states: 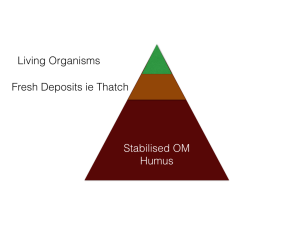 This is where the confusion comes in. You see, soil Organic Matter (Humus) is a critical component of soil as it helps to retain soil moisture and nutrients in the soil. So in this respect Organic Matter is a good thing. This stuff plays a big part in the Cation Exchange Capacity (nutrient holding ability) of the soil.

Organic Material on the other hand is something we can’t afford to have too much of in a bowling green. I am talking largely about Thatch here. Thatch is the build up of dead and dying roots and shoots of our grass plants and in a natural, healthy, living soil, is largely taken care of by the soil organisms and micro-organisms and turned into Humus (Organic Matter, OM).

However, as we have seen repeatedly, this natural decomposition and conversion of organic material into organic matter gets held up in sports-turf for a number of reasons. The grasses we try to encourage such as modern strains of bent grass and the ones we desperately don’t want to encourage but still do, like Annual Meadow Grass are prolific thatch producers anyway. Ally that to our excessive use of sand, pesticides and artificial fertilisers in the typical maintenance program and you get excessive Organic Material on the surface. This excess can’t be easily re-cycled by the soil organisms and micro-organisms. A while back I wrote an article explaining how this type of maintenance can result in a downward spiral of bad news for bowls greens. I also did an article showing how grassland that is relatively unhindered by our intensive maintenance regimes doesn’t produce excessive thatch. In this respect then, thatch is a human problem.

The reason then, that I referred to the moisture content of the green rather than of the soil, is that the Organic Material or thatch can’t really be considered to be part of the soil, as it is really just dead plant material lying on the surface. In many cases this layer can become so problematic that it effectively exists in isolation from the soil beneath and can actually cause a rootbreak below which no roots can extend. The greens I’ve seen in the midst of the Circle of Decline often have a clean break between the thatch and the soil so that if you wanted to, you could easily pull the turf away from the soil with your hands.

Excessively deep thatch tends to switch between two main states, depending on the prevailing weather conditions. In summer it can dry out completely and become hard and impenetrable even to water. This should not be confused with surface firmness as anyone who has bowled on a green in this condition will tell you. In wet weather and especially through the winter months excessive thatch takes on the opposite role and becomes a huge sponge which holds up water at the surface, stifles the underlying soil of oxygen and encourages disease outbreaks. Playing on this kind of surface is soul destroying as every footstep leaves a print, the green is soft and unpredictable and runs very slowly indeed.

The Experiment (the Loss on Ignition Test)

For the purposes of testing greens for Organic Matter, we take samples from the whole profile, starting at the turf level, usually down to 60mm depth.

We then subject these samples to a process called the Loss on Ignition test. As you might have guessed this measures the difference in the weight of the sample before and after the organic material has been burned off.

To do the test we first have to dry the samples thoroughly to remove all traces of water. This allows us to get an accurate weight for the sample. The samples are typically dried over a period of 24 hours in a drying oven at 1000C.

Once the samples are fully dried, they are weighed on an electronic balance and the weight recorded.

The samples then go into a device called a Muffle Furnace where the all of the Organic Matter and Material is burned off at up to around 10000C.

The samples are then weighed again and the results compared with the starting weights. The difference in weight before and after gives us a weight of organic material that has been burned off and we can work out what percentage of each sample was organic matter from these numbers.

In my experiments with my students we looked at 3 markedly different greens in terms of performance and the results are illustrated on the graph below: 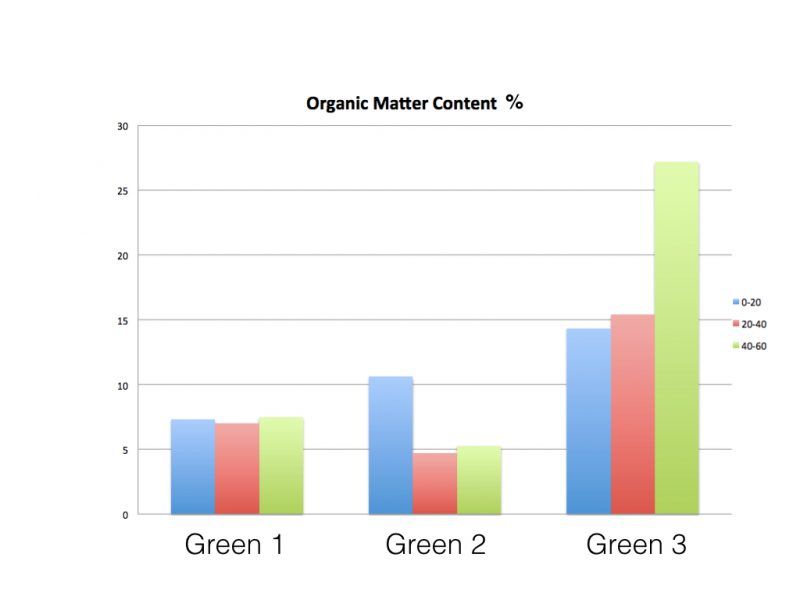 First a little description of each green.

Green 2. is a green constructed to USGA Specification in 1995 using a medium quarry sand and local sandy loam topsoil in the proportions of 75/25.

Green 3. is what is called a push up green built around 1970. In other words a green constructed out of the local, rather heavy soil, stones and all.

What we can see from the graph is that the Organic Matter is at manageable levels and evenly distributed through the profile on Green 1, accumulated at the surface in Green 2, and very high throughout the profile in Green 3, particularly in the deeper layer, which indicates buried thatch…buried by constant top-dressing and unable to decompose due to compaction and anaerobic conditions.

Establishing a direct relationship between Organic Matter and moisture content in the field is difficult as moisture content can vary from day to day due to the weather or irrigation. One way around this might be to take many measurements daily to to look at the way in which soils dry out in relation to their organic matter content, but for now we’ve minimised the effect of such anomalies by taking moisture readings from the greens on the same day. The greens are close enough geographically for the rainfall patterns on the day of testing to be ignored, and we have to assume that the rainfall patterns had been the same in the days preceding the sampling.

Ideally we are looking for Organic Matter to represent no more than about 5 or 6 % of the sample and to be distributed evenly throughout the profile as it is in Green 1. The sample from Green 1 showed no significant thatch build up at the surface or any layering in the profile. It was in fact a very homogenous profile with the ideal amount of fully decomposed organic matter throughout the profile.

Green 2, had a significant but not wildly excessive thatch build up at the surface as is demonstrated by the results and the deeper profile had no layering to speak of, or signs of un-decomposed organic material.

Green 3 has suffered from poor maintenance for many years including routine use of preventative fungicides, excessive application of fertiliser to try to produce a surface and an almost complete lack of aeration. Due to the heavier nature of the soil at the start it is subject to compaction and anaerobic conditions. Thatch has been left unattended and allowed to build up to seriously bad levels, some of which have simply been buried beneath sand top dressing, causing layering and a very high percentage of Organic Matter throughout, a lot of which isn’t fully recycled. This green is a very good example of the Circle of Decline.

You can probably draw your own conclusions about the likely relationship between the condition of the greens from our experiments, moisture content and therefore surface performance, but next time we’ll conclude this experiment into bowling green surface performance when we look at the moisture readings from these greens.

I’ll wrap this up by looking at some recommendations for the ideal bowling green in terms of moisture and firmness and distil all of this down to show how just one simple test that any greenkeeper can easily do can help you to keep your green in the ideal condition for high performance.