Green speed is always a hot topic at this time of year and the most popular methods for achieving increased speed are usually to turn off the water and set the mower down; both of which can cause long term damage to the green.

Mowing the green regularly below 5mm can really start to harm it in terms of sward composition, drought resistance and general turf health. Rooting depth is directly proportionate to the amount of leaf that remains above, so at the very time that the turf needs deeper roots to seek out deeper lying moisture, we restrict its ability to put down roots by shaving the leaf off to within a millimetre of its life! Shaving the green too low can cause irreversible damage to the crown of the grass plants, which causes bare areas or at least areas of weakened turf, which will inevitably be taken over by meadow grass, weeds and/or moss.

The other big mistake that many clubs make is to turn off the water in an effort to induce greater green speed. Although droughting will rarely kill a green off completely, we are seeing some very high temperatures this summer and it is possible that greens will fail if not given enough irrigation. But that’s another story which you can read about here.

So, what can be done to increase green speed without causing damage to the green?

Well, to really get the speed up we need to be thinking about reducing the lateral growth on the green. There are a number of factors that can help to increase green speed and consistency for play and we’ve set them out in our guide which you can find by clicking here.

Today however, I want to concentrate on lateral growth and its affect on green speed. On many greens I visit I am told that the green is being cut at 4mm and that the members are still complaining about the green being heavy! On most occasions when confronted with this, it is possible to take the palm of your hand across the turf and tease some of the grass up to 10 or even 15mm in height!…now think about that for a minute; how “heavy” would the green be if cut at that height?

This phenomenon is due to a problem called lateral (or sideways) growth where the grass plants exhibit a  recumbent growth habit and don’t stand up straight, meaning that they are not cut at the required height.

To overcome this problem we need to make allowance in our maintenance program for dealing with lateral growth. This can be achieved by several means, in order of importance these are: 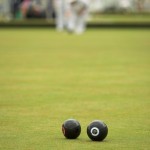 As always this season has started off with many greens playing “slow”. The usual reasons apply of course; mowing heights are still above summer level, the frequency of cutting is still low in many cases due to a really slow start to growth in many areas. Many greens are also thatchy and there has been a lot of moss about as we come out of winter, due partly to the excessively wet end to last summer and more significantly to long term Localised Dry Patch problems which are inherently linked to persistent moss problems. Oh yes and of course we are all still END_OF_DOCUMENT_TOKEN_TO_BE_REPLACED